Eddie Vedder’s wife Jill shared the following photo on Instagram, which features a jersey with ‘Impeach 45’ on it, calling for the impeachment of President Donald Trump. Chris Cornell’s daughter Lily commented on it: “My inspiration :))))))”

See the photo below. 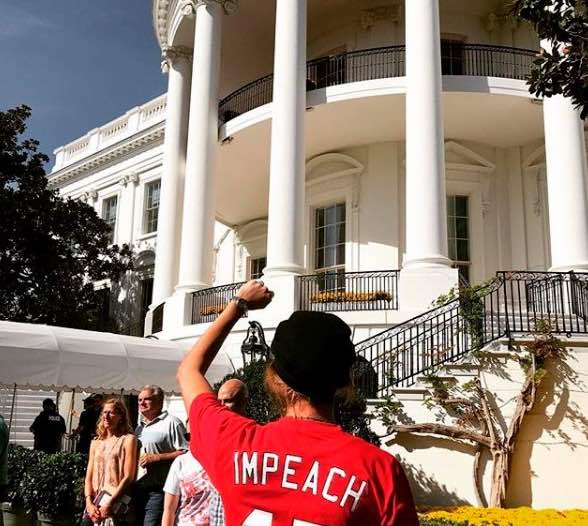 Eddie Vedder’s wife Jill took her daughter Olivia and Chris Cornell’s daughter Lily to the Bonnaroo Festival in June. Olivia’s 13th birthday was on the Sunday of the festival, and her Dad Eddie Vedder and fans sang Happy Birthday to her from across the Atlantic ocean at Ed’s show in Ireland. Lily and Olivia were photographed with Chance The Rapper.

THE MOST BEAUTIFUL PICTURE EVER!
EDDIE VEDDER AND CHRIS CORNELL
OLIVIA VEDDER AND LILY CORNELL SILVER

During a Pearl Jam Radio SiriusXM broadcast featuring Eddie Vedder in conversation with Mark Ian Wilkerson last year, an adorable recording of Vedder performing the Batman theme with his daughter Harper Moon was played. Listen below, via PearlJamOnline, demetrios, and Allon W.

Joe Buck shared an adorable photo on Instagram of Pearl Jam frontman Eddie Vedder reading Lucky Bastard to his daughters on a plane.

Lucky Bastard makes for great plane reading..! Eddie Vedder is a lucky bastard because of those girls. Take a photo with your copy, tag me and tell me why you're a #LuckyBastard this holiday season.

System of a Down Member Covers Stone Temple Pilots

Clutch Tears Up The Capitol Theater